How Worried Should Marketers Be About Ad Blocking?

There’s a lot of buzz lately, but not a lot of data, regarding ad blocking.

Yet, there’s a lot of activity in this space because it’s potentially a game-changing dynamic for marketers and advertisers. Certainly it would be for consumers.

PageFair and Adobe partnered back in 2014-15 in order to develop estimates of the ad-blocker user base. Together, they produced a survey of the ad-blocking landscape, “Estimating that 4.9% of internet users worldwide, or 144 million per month, were using ad-blocking software in Q2 2014, a nearly 70% year-over-year increase.” The US represented 45 million users, or 16% of US internet users. 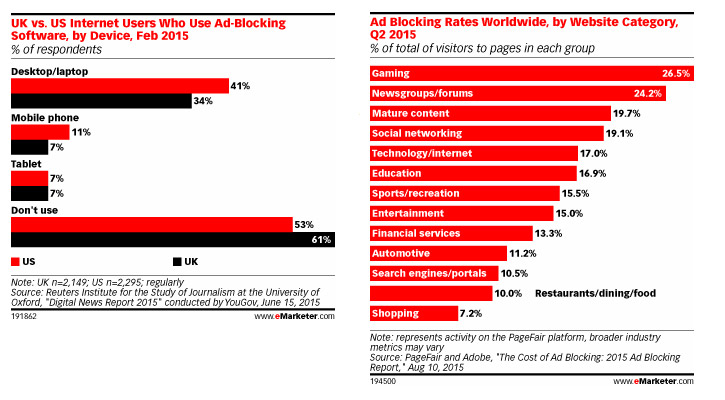 So, what are marketers and advertisers to do? Nothing, really.

In May 2015 Strata issued a survey demonstrating that, “44.8% of US ad agency professionals said ad-blocking software was not a concern for their agency or clients. Only 9% described it as a major concern, while 46.3% said it was somewhat a concern. Furthermore, 88.1% said ad blocking had had only a slight or no impact on ad spending.”

From the eMarkerter article that contains all of this information and links to surveys and reports, the big takeaway, from eMarketer’s perspective is, “Yet at the moment, at the aggregate level, digital advertising’s status quo appears safe. Agencies, brands and ad networks have been largely insulated from any major disruption of activity so far. Although some percentage of internet users have made themselves unreachable to ads, their absence hasn’t necessarily hurt the digital advertising ecosystem.”

Let’s go back to the question asked above: So, what are marketers and advertisers to do about ad blocking?

Content is King! If you find yourself overwhelmed trying to develop, manage and maintain a solid content marketing strategy, click or call us at 800.536.6637 and let’s talk!