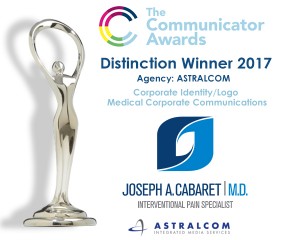 (Lakewood, CA – May 26, 2017) – ASTRALCOM, LLC today announced that they had recently been named as a 2017 Communicator Award winner for their work in designing the Joseph A. Cabaret, MD logo.

This year marks the 23rd Annual Communicator Awards by the Academy of Interactive and Visual Arts. With over 6,000 entries received from across the US and around the world, the

Communicator Awards is the largest and most competitive awards program honoring creative excellence for communications professionals. The Awards are judged and overseen by the Academy of Interactive and Visual Arts (AIVA), a 600+ member organization of leading professionals from various disciplines of the visual arts dedicated to embracing progress and the evolving nature of traditional and interactive media.

ASTRALCOM submitted their logo creation for their client Joseph A. Cabaret, MD and were proclaimed as a “Distinction Winner.”

“We are both excited and amazed by the quality of work received for the 23rd Annual Communicator Awards. This year’s class of entries is a true reflection of the progressive and innovative nature of marketing and communications,” noted Linda Day, executive director of the Academy of Interactive and Visual Arts. She added, “On behalf of the entire Academy I want to applaud this year’s Communicator Awards entrants and winners for their dedication to perfecting their craft as they continue to push the envelope of creativity.”

“We’re very excited to be winners of the 2017 Communicator Award,” said Bill Aitchison, Executive Creative Director at ASTRALCOM. “It’s a testament to the vision and dedication we bring to our clients and how we truly are a part of their success,” he explained.

See more about the Joseph A. Cabaret MD logo creation at www.astralcom.com.