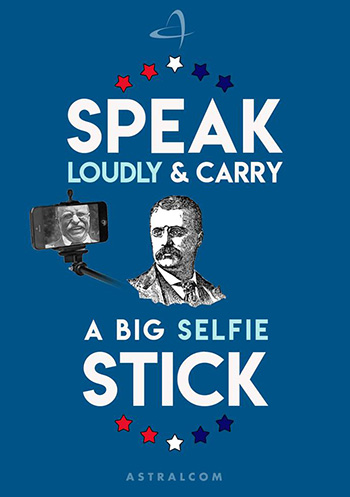 No matter how you feel about Paris Hilton and Kim Kardashian, we have them to thank for today’s “look at me!” economy. Reality TV helped spawn an entirely new faction of society. One that presents us today with people like Ms. Hilton and Ms. Kardashian and a whole new slew of social media personalities whose every detail is revealed on an ongoing basis. Indeed, it is the age of constant self-promotion and social media is the perfect megaphone for doing just that.

In this insightful post on BBC.com, Lennox Morrison tells it this way; “It’s an aspiration facilitated today by a vast array of social media platforms dependent on billions of people sharing details of their lives and thoughts in varying degrees of digital exhibitionism. The rise of YouTube stars and Instagram influencers has further emphasized the importance of standing out from one’s peers with a strong personal brand.”

It’s a complete 180-degree difference from the days of President Theodore Roosevelt’s Big Stick ideology; namely to “Speak softly and carry a big stick.” In other words, to not boast and let one’s actions speak for themselves. Rather, today, if you’re not at least regularly “humblebragging” about something you’re doing (or have done), you’re missing an opportunity to self-promote.

It makes complete sense, especially when you think about the amount of content published to the web- every single minute. How else can we as individuals (or even as companies) expect to grab someone’s attention in the ever-expanding sea of content?

Speak loudly and carry a big selfie-stick! That’s how.

If you’re too shy, we can hold your hand and together, we can help you connect with your audience, whomever and where ever they are.